Saint Michael The Archangel is one of the most important entities in the catholic pantheon, petitioned to defend from evil, undo it and general pleas of justice. He is considered to be extremely powerful and helpful against ones enemies and specially attacks from demonic origin. Even thou he is known to be an archangel, meaning he is a main (arch) messenger (angel) of God, others place him on different angelic choirs stating he holds several positions inside the heavenly hierarchy. Highly regarded among all the angels for being most  helpful and effective against evil, even in dominican vudu 21 division he is syncretized with Belie Belcan an protective spirit said to be the owner of all "works" in this world, who can untie any trick and protect against them. In some currents of santeria he is Oggun, the warrior oricha of metal, work and war.
His patronage includes police officers and those in charge of protecting others. He was also once considered a psychopomp, which means he holds power over the dead.
His day is september 29th, his color is red or blue, his talisman is a little sword and his herbs are michaelmas daisy, angelica root, garlic and guinea peppers
Among the different devotions dedicated to St Michael which you can do in his name or to develop a relationship with him are:
Playing the Te Splendor a Roman Catholic hymn dedicated to Saint Michael.
Praying the Chaplet to St Michael, his most famous prayer or his novena.
Or carrying St Michael's Scapular. 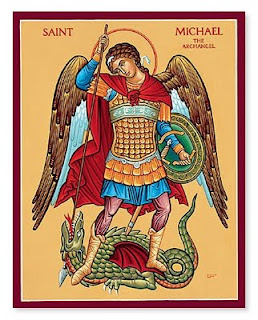 A traditional reversal work in Latin America is the Revocación con San Miguel Arcangel. It purpose is to call off any work sent against you and turn it back against to who threw it. One of the good things about this trick is that it doesn't call on any names so it sends back any harm known or unknown to you. There are two variations to this work and the prayer.
Implements:
1 Red Candle
1 white plate
First you say a prayer to st Michael, any of your choice, prayer from the heart also works. Then you take the red candle, cut the top off and carve out a new wick out of the bottom. Holding the candle in its former upright position and pray the following as you turn it:
As i turn this candle i have on my hand so may all my enemies and all wrong they are doing against me or trowing against me turn, be it man or woman. May I call on my enemies with these holy words and have them come humiliated to my feet, as Satan was humiliated to saint Michael's feet. may they have eyes and not see me, hand and not touch me, thoughts and not think of me, knives and not cut me, weapons and not shoot me, mouth and not speak to me. May all harm found at my home be undone and return, so it may become a blessing, and may anyone trying to do harm against me have his ideas undone and turn back in regret. In the name of the Father, the Son and the Holy Spirit, in the name of all that is good, Amen.
The second version of the trick calls for a glass which you fill up with water to a little bit more than half, place a plate on top of it and turn it around, setting a white candle on top of the glass which you have fixed the same way as the red candle. After the candle burns out you dispose of the water and cleanse the glass with a bit of ammoniac.
If you wish to add reversal oil to the candle or Saint Michael oil it can be done without any problem.
For protection work calling on Saint Michael i recommend the following:
Check out Devi's awesome amparo video, a traditional mexican curanderismo protection you can learn how to make on your own or have her make one for you, shes a very knowledgeable worker and also has a close relationship with Saint Michael, so you can trust her to make a very strong protection for you.
You can also get Momma Starr's Saint Michael Protection kit that comes with all the necessary implements to protect yourself with Saint Michael's help. Starr has over 30 years of experience and has worked with this angelic saint for a long time, making her own products the traditional way with prayer and all the right herbs.
And if you are feeling more adventurous, Doña Concha a traditional Curandera, teaches you how to fix a Saint Michael medal for protection on her blog.
Mister M.
Published by Mister M at 9:16 PM